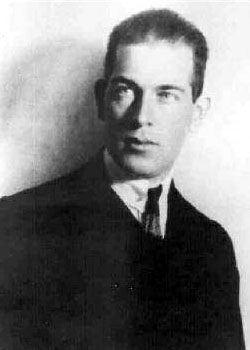 Max Valier was an Austrian amateur rocketeer and space popularizer who advocated the use of rockets for spaceflight. Educated in physics at the University of Innsbruck, he experimented with rockets in the 1920s with the Verein für Raumschiffahrt, (Society for Space Travel), which he helped found and of which Wernher von Braun and Hermann Oberth were prominent members. His non-technical book Der Vorstoss in den Weltenraum (The Advance into Space) spread Oberth's ideas to a wide audience.

Valier was also interested in using rockets to propel ground vehicles and, together with Fritz von Opel and Friedrich Sander, built the world's first rocket-powered automobile in 1928. Two years later, aged only 31, Valier was killed when a small, steel-cased LOX/alcohol engine, designed for use in the Opel-RAK 7 rocket car, exploded during a test run in his laboratory.

In the 1920s members of the Verein für Raumschiffahrt amused themselves by redesigning Jules Verne's Moon gun, the Columbiad. In 1926, Max Valier and Hermann Oberth designed a gun that would correct Verne's technical mistakes and be capable of firing a projectile to the Moon. The projectile would be made be of tungsten steel, practically solid, with a diameter of 1.2 m and a length of 7.2 m. Even using the latest gun propellants, a barrel length of 900 m would be necessary. To eliminate the compression of air in the barrel during acceleration, it was proposed that the barrel itself be evacuated to a near-vacuum, with a metal seal at the top of the barrel. Residual air would provide enough pressure to blast this seal aside before the shell exited the gun. To minimize drag losses in getting through the atmosphere, it was proposed to put the mouth of the gun above most of Earth's atmosphere: it would be drilled into a high mountain of at least 4,900 m altitude.