Fig 1. The Opel-RAK 1 car, with Kurt Volkhart at the wheel. 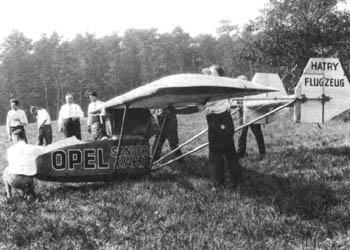 Opel-RAK was a series of rocket powered cars and planes commissioned and, in some cases, driven or piloted, by the automobile tycoon Fritz von Opel, of the Opel car company, in association with others, including Max Valier and Wilhelm Sander.

The world's first rocket-propelled car was driven by Kurt C. Volkhart to a top speed of 75 km/h (47 mph) on Mar 15, 1928, at Opel's track near Rüsselsheim. The experimenters then decided to replace the standard car they'd been using with a vehicle specially designed for 400-lb Sander rockets.

The new car, called the Opel-RAK 1 (Fig 1), was a converted racer whose conventional engine was replaced by six Sander rockets and then by eight. On Apr 12, 1928, successful runs were made at speeds of up to 55 mph over 2,000- to 3,000-foot distances at Rüsselsheim. Then a 12-rocket experiment was made, and though five rockets failed to ignite, the car reached more than 70 mph. The Opel-RAK 1 was followed by the Opel-RAK 2, which was fitted with short, inverse wings to hold it to the ground as it sped along. Opel-RAK 2 (Fig 2), fitted with 24 rockets and with Opel himself at the wheel, sped down a track in Berlin on May 23, 1928, at a speed of 143 mph (230 km/h).

These tests were followed by the RAK 3 railway-car experiments in June and October 1928. The first, conducted between Celle and Burgwedel, were powered by 24 large powder rockets that accelerated the car to well over 100 mph. The second series of tests, using 30 solid rockets, was held between Blankenburg and Halberstadt. One run was successful, reaching a speed of 157 mph (254 km/h); the other, with a larger and heavier payload, was not.

Also in 1928, von Opel purchased a sailplane named the Ente (German for "duck") from Alexander Lippisch and attached rocket motors to it, creating the world's first rocket plane on Jun 11. The aircraft exploded on its second test-flight, before von Opel had a chance to pilot it himself, so he commissioned a new aircraft from Julius Hatry, and flew it at Frankfurt-am-Main on Sep 30, 1929. This plane is also known as the Opel-RAK 1, or, alternatively, as the Opel-Hatry RAK 1 or Opel-Sander RAK 1 in acknowledgement of its builder or the supplier of its engines respectively (Fig 3). In still other references it is called the RAK 3 to distinguish it from Opel's previous RAK 1 and RAK 2 rocket cars. As it happened, all three names, Opel, Sander, and Hatry were painted on the aircraft (with Opel's most prominent), as was the RAK 1 designation.

The RAK 1 had a sailplane wing, under which a pod was suspended to house the pilot and 16 Sander black powder rockets. The tailplane was mounted on booms behind the wing and up out of the way of the rocket exhaust. Opel successfully piloted it over 1.5 km (1 mi) in 75 sec of flight, but landed hard, damaging the aircraft beyond repair. Opel planned to build a second rocket plane, but apparently lost interest before the project was completed.