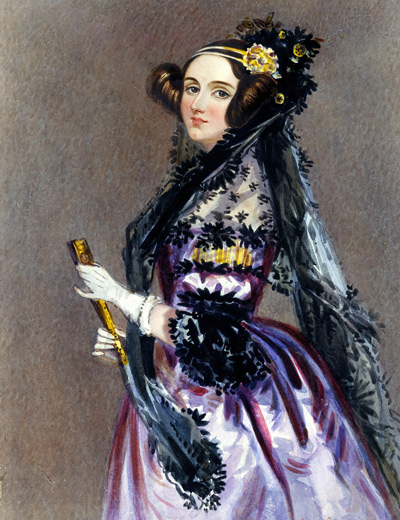 Ada Byron, also known as Lady Lovelace, was the daughter of Lord Byron and one of the most picturesque characters in computer prehistory. Her parents separated five weeks after her birth and she was raised by her mother (neé Annabella Milbanke), whom Lord Byron had called his "Princess of Parallelograms" because of her interest in mathematics and who was determined that Ada would become a mathematician and scientist, not a poet like her father. Ada, however, managed to combine both worlds, blending her science with poetical vision and her mathematics with metaphor.

At the age of 17 she was introduced to Mary Somerville, a remarkable woman who translated Laplace's works into English, and whose texts were used at Cambridge (where a women's college is now named after her). It was at one of Mary Somerville's dinner parties, in November 1834, that Ada first heard of Charles Babbage's ideas for a new calculating machine, the Analytical Engine, and was immediately intrigued. In 1843, married and the mother of three children, Ada translated a French article about the Engine and showed it Babbage. He suggested that she add her own notes, which turned out to be three times the length of the original piece and included prescient comments about how such a machine might be used to compose complex music, produce graphics, and solve scientific problems. A regular correspondence ensued between Ada and Babbage, during which Ada suggested to Babbage a plan for how the engine might calculate Bernoulli numbers – a plan now regarded as the first computer program. In recognition of this, a software language developed by the US Department of Defense was named "Ada" in 1979. Like her father, she died at the age of 36, following a series of illnesses.

1. Toole, Betty A. (ed). Ada, the Enchantress of Numbers: A Selection from the Letters of Lord Byron's Daughter and Her Description of the First Computer. Mill Valley, CA: Strawberry Press, 1998.