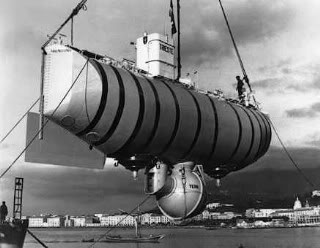 A bathyscaphe is a submersible deep-sea research vessel, invented by Auguste Piccard and first used in 1948, comprising a small, spherical, pressurized passenger cabin suspended beneath a cigar-shaped flotation hull. On the surface, most of the flotation tanks in the hull are filled with gasoline, the rest, sufficient to float the vessel, with air. To dive the air is vented and seawater takes its place. During descent, sea water is allowed to enter the gasoline-filled tanks from the bottom, compressing the gasoline and thus increasing the density of the vessel. The rate of descent is checked by releasing iron ballast. To begin ascent, the remaining ballast is jettisoned. As the vessel rises, the gasoline expands, expelling water from the flotation tanks, thus lightening the vessel further and accelerating the ascent. Battery-powered motors provide the vessel with a degree of submarine mobility.

In January 1960, Piccard and Don Walsh of the US Navy, made a descent in the bathyscaphe Trieste to a depth of 10,916 m (35,810 ft) (more or less equivalent to the altitude of commercial jets) in the Pacific Ocean's Marianas Trench off the coast of Guam.

A bathysphere was a hollow steel sphere suspended by cables from a surface ship and used for deep-sea research before the development of the bathyscaphe. The first bathysphere was built and used by the the engineer Otis Barton and the naturalist William Beebe in 1930; diving of Bermuda in 1934 they reached a then-record depth of 3,023 ft (923 m). 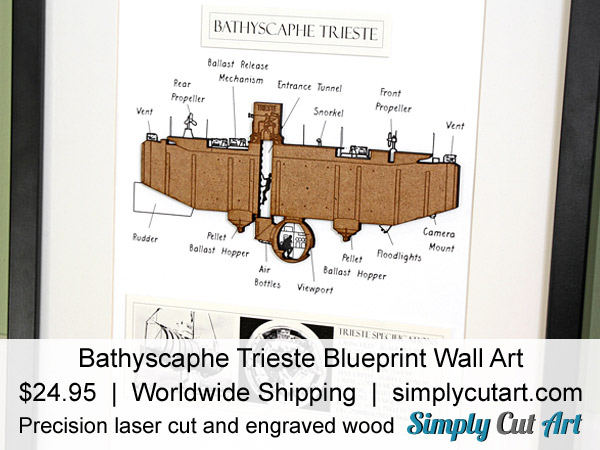