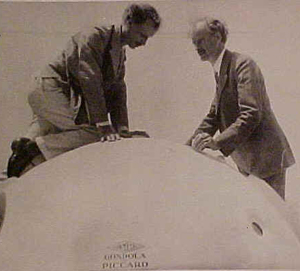 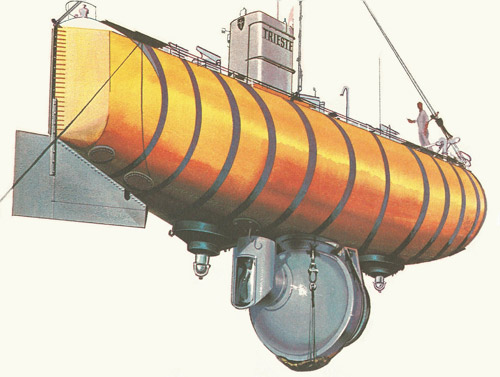 The Trieste, the bathyscaphe designed by Auguste Piccard, which in 19660 descended nearly miles into the Pacific Ocean depths, manned by Jacques Piccard and Don Walsh. 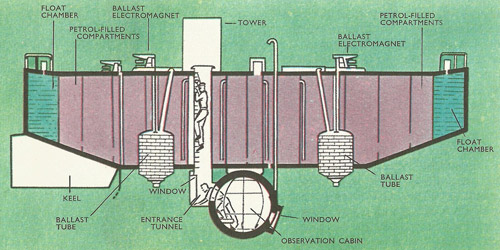 Diagram of the structure of the Trieste, showing the compartments filled with gasoline. The float chambers at each end are filled either with water or with air, depending on whether the craft is intended to submerge or to float.

Auguste and Jean Piccard were Swiss twin brothers – August, a physicist, and Jean, a chemist. Both made famous high-altitude balloon ascents in order to study cosmic rays with a minimum of atmospheric interference, Auguste in 1931 and 1932, and Jean in 1936. In 1948 Auguste successfully conducted an unpiloted trial dive of the bathyscaphe, a deep-sea diving device built to his own design; the first piloted dive – in a new bathyscaphe – took place in 1953.

Auguste Piccard first became interested in exploring the stratosphere and reasoned that a manned balloon could ascend to such heights to measure, for example, radiation and the activity of cosmic rays. To this end, he built an aluminum airtight gondola supported by a large balloon and, in 1931, succeeded in reaching an altitude of well over 51,000 ft, ascending from Augsburg. A year later, together with Max Cosyns, he reached a height of over 54,100 ft, from Zurich. Important as these achievements were, there is little doubt that, in the public mind at any rate, he is best remembered for his exploration of the depths of the sea.

After World War II, Auguste Piccard designed the bathyscaphe as instrument of research to carry two people to the bottom of the ocean. In appearance Piccard's bathyscaphe resembled a large sausage, nearly 50 ft long and just over 11 ft 6 in in diameter. Below this structure was a circular cabin, about 6 ft across, which could hold two people in comfort. A window in the cabin enabled them to observe conditions in the ocean outside. Amongst the scientific equipment carried were an echo-sounder, an electronic flash camera, and a special acoustic telephone which enabled the observers to talk to the escorting surface ship by transmitting sound waves through the water. Devices in the bathyscaphe enable it to be raised or lowered by the crew at will. Propellers driven by electric motors enable a limited amount of horizontal movement.

Thousands of feet down in the ocean pressures as so great that no man could survive without the protection the bathyscaphe affords. The cabin was heavily built of steel, three and a half inches thick. The air inside was kept at a pressure similar to that of the atmosphere, so the occupants had little difficulty in breathing. The depth of the bathyscaphe was controlled by making it lighter or heavier. There were two main devices for altering the weight. The main body (float) of the craft was divided into compartments containing gasoline. Gasoline is 30% lighter than water, so that the bathyscaphe would normally have an inherent tendency to float. The hull of the float was quite thin and would not resist great pressure. It doesn't need to stand up to the pressures from outside, however, because water is allowed to flow in through holes on the underside. Equal pressures are thus maintained inside and outside the hull. The float chambers at each end of the craft could be either flooded with water (in which case the bathyscaphe would sink) or allowed to remain empty (when the craft would float on the surface). The most important alteration in weight, however, was effected by two ballast tubes which each held five tons of iron pellets, held in place by electromagnets. When the magnets were switched off the pellets were dropped and the bathyscaphe would become lighter and tend to rise to the surface. Using a combination of float chamber and ballast tubes the depth of the bathyscaphe could be controlled accurately.

After a prototype FNRS-2 had been developed, two bathyscaphes were built to Piccard's designs, the FNRS-3 for the French Navy and the Trieste, launched in 1953. In that year, Auguste and his son Jacques took the Trieste over 10,000 ft down in the Mediterranean Sea near Naples. In 1956 Auguste descended 12,000 ft in the same area. The greatest test, however, came in January 1960, when the Trieste, sponsored by the US Navy, made the record dive in the West Pacific Ocean. Manned by Jacques Piccard and Lt. Don Walsh of the US Navy, the bathyscaphe descended in the Marianas Trench some 35,800 ft (about seven miles), taking over four and a half hours to do so.

After Auguste Piccard's death in 1962, his work was carried on by his son Jacques.