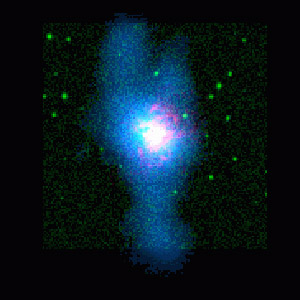 NGC 1705, a very active blue dwarf compact galaxy at a distance of about 6 Mpc. It hosts a young (about 10 Myr) super star cluster with a mass of around a million solar masses, which may be the main source of mechanical energy for the outflow. This picture mixes three images: neutral Hydrogen (HI) in blue, broad band optical in green, and ionized hydrogen in red. Image credit: Gerhardt Muerer et al.

A blue compact dwarf galaxy (BCD) is the lowest luminosity type of starburst galaxy. It is a small galaxy, about one-tenth the size of a typical large spiral such as the Milky Way, that appears blue by virtue of containing large clusters of hot, massive stars, which ionize the surrounding interstellar gas with their intense ultraviolet radiation. These massive blue stars are very young by stellar standards – under ten million years or so old. They were created in a huge starburst, a violent episode of star formation that in some cases engulfs an entire galaxy.

Observations of the young universe show a much larger population of blue galaxies at early epochs, suggesting that they might play a key role in the early history of galaxy formation. Local BCDs, such as Haro 3 (NGC 3353), may be the galactic equivalent of the coelacanth – primeval structures surviving into a mature cosmos that form laboratories for the study of galactic evolution.