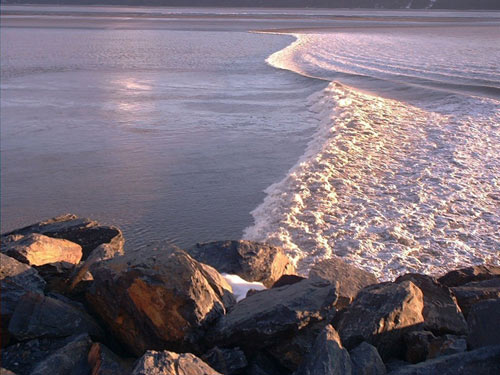 A bore, also called an eagre, is a tidal phenomenon of rivers that widen gradually toward broad mouths, and that are subject to high tides. During spring floods, larger quantities of water from the sea than can normally flow upriver are driven into the river mouth, resulting in a high wave that travels upriver at great speed.

A tidal bore enters a river mouth as a single wave, or as two or three waves at the most, with a steep, high front. Tidal bores can only form in rivers with sandbars at their mouths and along coasts with a considerable tidal range. The sandbars keep the the mass of water back until it has accumulated sufficient force to rush over the barrier and sweep up the river, sometimes for hundreds of miles. The Amazon, for example, has a tidal bore that travels several hundred miles inland and is sometimes over 5 m high. Other well-known bores are those of the Ganges and the Bay of Fundy. The most famous tidal bore in Britain is the one that sweeps up the river Severn, sometimes as far as Tewkesbury, at a height of about one meter.

A bore is an example of a soliton.