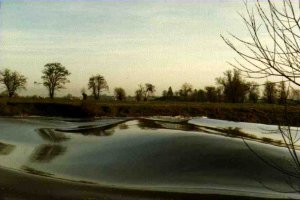 The Severn bore: a soliton on a river.

The first soliton to be described was a water wave seen by the engineer and shipbuilder John Scott Russell (1808–1882) in 1834 when he was riding by the Grand Union Canal at Hermiston, Glasgow. He observed that when a canal boat stopped, its bow wave continued onward as a well-defined elevation of the water at constant speed. (Another account says Scott Russell observed it on the Glasgow and Ardrossan Canal when a horse bolted with a light canal boat in tow.) The phenomenon was largely forgotten until the 1960s, when the American physicist Martin Kruskal rediscovered it and called it a soliton wave. On Jul 12, 1995, a viaduct at Hermiston was renamed the John Scott Russell viaduct, with Kruskal unveiling plaques and attempting to recreate a soliton wave.

A classic soliton occurs on the River Severn, which starts at the head of the triangular Bristol Channel and narrows rapidly upstream. When the tide comes in, it is greatly compressed and produces the Severn Bore (see bore), a tidal wave up to 2 meters (6 feet) high which rushes about 32 km (20 mi) up the river to Gloucester at a speed of up to 16 km/h (10 mph). It is strongest at the spring tides, i.e., at full and new moons, and is now popular with surfers and canoeists.