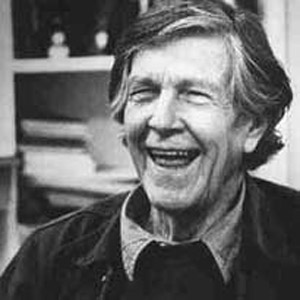 John Cage was an American avant-garde composer perhaps best known for the quietest piece of music ever written. He coined the term "indeterminacy" in a musical context, following the completion of his first indeterminate instrumental work, Imaginary Landscape No. 4, in 1951. It describes compositional practices in which the sounding outcome – either the length or the sound of individual parts, or both – of a work is not clearly defined. Thus the performer becomes a true co-creator of the work.

Cage's works extended the musical realm, as he drew inspirations from Eastern philosophy, the New York School of visual artists, and Fluxus, an avant garde group of artists. While indeterminacy is related to improvisation, there are some fundamental differences; instead of the fixed harmonic or structural framework of a typical improvisatory composition, performance actions are described. In Imaginary Landscape No. 4 a radio is used, with whatever program that is on becoming part of the piece. Indeterminacy reached the highest level with Cage's 4'33".

His piano composition 4'33" calls for the player to sit in silence for 273 seconds – this being the number of degrees below zero on the centigrade scale of absolute zero at which molecular motion stops. 4'33" was inspired by Cage's visit to Harvard University's anechoic chamber about which he wrote:

There is no such thing as empty space or empty time. There is always something to hear or something to see. In fact, try as we might to make a silence, we cannot. For certain engineering purposes, it is desirable to have as silent a situation as possible. Such a room is called an anechoic chamber, its walls made of special materials, a room without echoes. I entered one at Harvard University ... and heard two sounds, one a high and one a low. When I described them to the engineer in charge, he informed me that the high one was my nervous system and the low one was my blood circulation.

Cage's 4'33" breaks traditional boundaries by shifting attention from the stage to the audience and even beyond the concert hall. The listener becomes aware of all sorts of sound, from the mundane to the profound, from the expected to the surprising, from the intimate to the cosmic – shifting in seats, riffling programs, breathing, a creaking door, passing traffic, a recaptured memory. Is sitting quietly alone for 273 seconds equivalent to a private performance (and audience) of the piece? Or, in the final analysis, is it all pretentious nonsense? In his essay on "Nothing" Martin Gardner wrote: "I have not heard 4'33" performed, but friends who have tell me it is Cage's finest composition."

Cage challenged the listener to focus on the placement of sounds in his music for prepared piano and music using electronic equipment. Rocks (1986) requires radios, television sets, cassette machines, and machines emitting fixed sounds like vacuum players, buzzers, and alarms. In Child of Tree (1975) and Branches (1976) cactus spikes are played with toothpicks.