The unattainability of absolute zero is graphically demonstrated by this illustration, in which the absolute temperature is plotted in degrees kelvin on a logarithmic scale rather than a normal linear scale. The logarithmic scale better represents the task confronted by low-temperature physicists, since in nature the ratio of two absolute temperature T1/T2, is more important than their difference T1 - T2. Thus the distance from 10 K to 1 K is just as great as the distance from 0.001 K to 0.0001 K. On the logarithmic scale, the point at which T = 0K is infinitely far to the left. 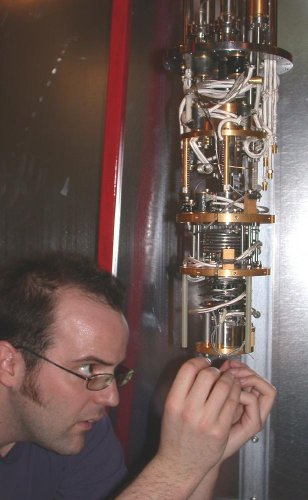 The temperature on this diagram are stated in both the Kelvin (absolute) and Celsius (centigrade) scales, below a temperature equivalent to the melting-point of ice in equilibrium with water.

Liquid air has a temperature of only 83 K (–190 °C) and thus a flower dipped in it will solidify completely as all the fluid in its cells freezes. When this happens the flower becomes so brittle that it can be broken into small pieces with a blow from a hammer. Liquid air is used industrially for freezing other substances and for the commercial production of oxygen and nitrogen. 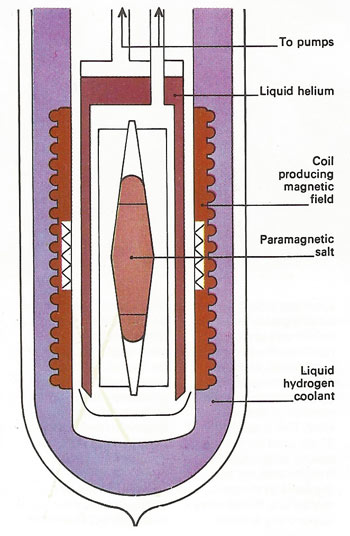 To approach absolute zero – below 1 K (–272 °C) – a phenomenon called adiabatic demagnetization of paramagnetic salt is one that acts as a magnet only in a strong magnetic field. The field forces the molecules into an orderly array. If there is no exchange of heat energy during this process than it is said to be adiabatic. But when they are ordered the molecules have less energy and the balance is given up to the salt, raising its temperature above 1 K. Liquid helium is then used to re-cool the salt. If it is now demagnetized, its molecules become disordered. The energy for this can come only from the salt and its temperature falls below 1 K. 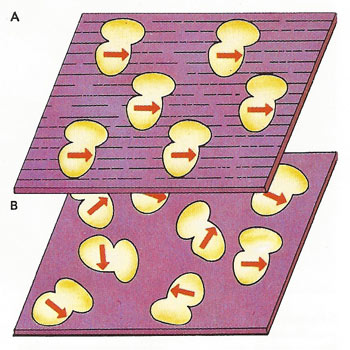 The molecules of a paramagnetic salt are normally in continual disordered motion, even if the temperature is as low as 1 K (–272 °C). As long as the molecules behave in this way there is no part of the salt that appears to be like either pole of a magnet. As soon as the salt is placed in a magnetic field [A], however, the molecular magnets line up along the field and endow the bulk substance with north and south magnetic poles. Molecular disorder returns when the field is removed [B].

Absolute zero, in theory, is the lowest possible temperature, and therefore the lowest possible total energy of a system. Although it might be expected that all particle motion would stop at absolute zero, this is not in fact the case. The Heisenberg uncertainty principle asserts that even at the minimum conceivable temperature, subatomic particles would still possess a residual kinetic energy known as zero point energy. A strange outcome of this fact is that the closely packed electrons in a metal at absolute zero would have the same energy as an ordinary gas at 50,000&#176C. Thus, although at absolute zero a system's entropy is zero, the total energy of a system is not zero.

Temperatures within a few billionths of a degree of absolute zero have been achieved in the laboratory. At such low temperatures, substances have been seen to enter a peculiar state, known as the Bose-Einstein condensate, in which their quantum wave functions merge and particles lose their individual identities.