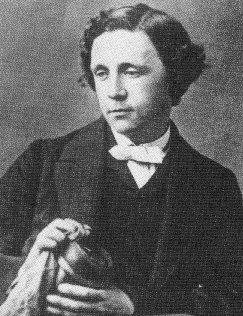 Lewis Carroll was the pen name of Charles Lutwidge Dodgson (obtained by anglicizing the Latin translation, "Carolus Lodovicus," of his first two names), an English mathematician, logician, and writer. Carroll was born at the Old Parsonage, Newton-by-Daresbury, Cheshire, his father being the vicar of All Saints Church, Daresbury; there is a commemorative window in the church, and a "Wonderland" weather vane, showing the Mad Hatter, the White Rabbit, and Alice, on the local primary school. Carroll was educated at Rugby School (the student mathematics society there is still called the Dodgson Society in his honor) and then at Christ Church, Oxford, where in 1854 he earned a first-class honors degree in mathematics. He spent the rest if his life at this college, employed mainly as a lecturer.

His most famous book, Alice's Adventures in Wonderland (1865), grew out of a story he told on the hot summer afternoon of July 4, 1862, when out rowing with the three young daughters of the Greek scholar H. G. Liddell, dean of Christ Church. Alice, named after Alice Liddell (later Hargreaves, 1852–1934), continued her adventures in Through the Looking-Glass (1871). Carroll wrote other books for children, including a long poem "The Hunting of the Snark," (1876) and published several mathematical works, but was not distinguished academically. He stammered badly, never married, and seemed to find greatest pleasure in the company of little girls, with whom he lost his shyness. He was also an inventor of puzzles, games, ciphers, and mnemonics, and an amateur pioneer in photography. Carroll was a master of fantasy and his stories have their own logic. Carroll used the pun and coined neologisms, including what he called "portmanteau words" like chortle (combining chuckle and snort). He played games with idioms, using such expressions as "beating time" (to music) in a literal sense. He reshaped such animals of fable or rhetoric as the Gryphon, the March Hare (said to have been inspired by a carved hare carrying a satchel located at St. Mary's Church, Beverly, Humberside, where Carroll visited), and the Cheshire Cat, and invented new ones, including the Bandersnatch and the Boojum.


Some puzzles invented by Dodgson

2. If you paint the faces of a cube with six different colors, how many ways are there to do this if each face is painted a different color and two colorings of the cube are considered equivalent if you can rotate one to get the other? What if we drop the restriction that the faces be painted different colors?

3. Make a word-ladder from FOUR to FIVE. (Every step in a word ladder differs from the previous step in exactly one letter and each step in the ladder is an English word.)

See solutions are below.


From Alice's Adventures in Wonderland:

"The different branches of Arithmetic – Ambition, Distraction, Uglification, and Derision."

"Alice laughed: "There's no use trying," she said; "one can't believe impossible things."

"I daresay you haven't had much practice," said the Queen. "When I was younger, I always did it for half an hour a day. Why, sometimes I've believed as many as six impossible things before breakfast."

"Then you should say what you mean," the March Hare went on.
"I do, " Alice hastily replied; "at least I mean what I say, that's the same thing, you know."
"Not the same thing a bit!" said the Hatter. "Why, you might just as well say that "I see what I eat" is the same thing as "I eat what I see!"

"Take some more tea," the March Hare said to Alice, very earnestly.
"I've had nothing yet," Alice replied in an offended tone, "so I can't take more."
"You mean you can't take less," said the Hatter. "It's very easy to take more than nothing."


From The Hunting of the Snark:

"What I tell you three times is true."


From Alice Through the Looking Glass:

"It's very good jam," said the Queen.
"Well, I don't want any to-day, at any rate."
"You couldn't have it if you did want it," the Queen said. "The rule is jam tomorrow and jam yesterday but never jam to-day."
"It must come sometimes to "jam to-day,""Alice objected.
"No it can't," said the Queen. "It's jam every other day; to-day isn't any other day, you know."

"I don't understand you," said Alice. "It's dreadfully confusing."

"When I use a word," Humpty Dumpty said, in a rather scornful tone, "it means just what I choose it to mean – neither more nor less."

"The question is," said Alice, "whether you can make words mean so many different things."

"The question is," said Humpty Dumpty, "which is to be master – that's all."