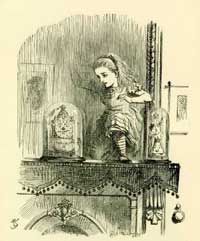 Why does a mirror reverse right and left, but not up and down? This question crops up perennially in the letters and queries columns of magazines and newspapers. It was the inspiration for Lewis Carroll's Alice Through the Looking Glass. Alice Raikes (not to be confused with Alice Liddell after whom the fictional Alice was modeled) was another of Carroll's young friends. On one occasion, in 1868, Carroll put an orange in her right hand and then asked her to stand in front of a mirror and say which hand the reflection had the orange in. She said the left hand and Carroll asked her to explain. She finally replied "If I was on the other side of the glass, wouldn't the orange still be in my right hand?" Carroll said this was the best answer he'd had and later said it gave him the idea for his book. Others have struggled harder but not always convincingly to explain the phenomenon, appealing variously to gravity, the psychology of perception, and philosophy.

Why does a mirror reverse right and left, but not up and down? A frequently given answer is that a mirror doesn't reverse right and left. It reverses front and back. This is certainly true: the looking-glass you is facing in the opposite direction to the "real" you. But this short, crisp explanation doesn't completely dispel the mystery. The fact is that, if you imagine that the mirror is not there and that instead you are looking at a real flesh-and-blood twin of yourself, that twin is differently handed. If you have a watch on your left wrist, the person you are facing has his/her watch on the right wrist. The mirror has done a left-right swap, surely! At any rate, something has happened to left and right that hasn't happened to up and down. To be more convinced of this, hold this book up to the mirror and try to read it. If no left-right swap has happened, why is the reflected writing so hard to read? Firstly, remember that you are only looking at an image! The mirror hasn't (Carrollian fantasies aside) created something of opposite handedness. Secondly, appreciate how the writing appears in the mirror's frame of reference. This is easy to do by looking at the writing from the other side of the page (i.e. back to front, thus undoing the back to front reversal caused by the reflection). From the mirror's point of view the writing looks perfectly normal.


New approach to an old problem

[The following was contributed by Mike O'Neill]

The mirror reversal puzzle is not so much a matter of the science of light rays, optics, and the Physics behind mirror reflection, but is far more a people thing. It may best be solved by a science of human activities – a science that deals with how people interact with complicated or subtle things. The structure of "reversedness" in a human being's mental imagery is far more subtle than the reversal of a photon's trajectory.

When people want to compare any two nearly identical objects for some subtle difference, they tend to use two common strategies. These two strategies are often useful, but are also oddly contradictory.

In the first strategy, the two objects are lined up to face in the same direction before being compared. For instance, if two nearly-identical pens are to be compared, it would be unusual to hold one pen horizontally, the other vertically, and then proceed to compare them. People commonly want hold them facing in the same direction for such a task.

When a person uses this strategy in the mirror situation they like to imagine themselves rotating about a vertical axis for a comparison with their image. This rotation brings them to face the same direction as their earlier image was pointing. This also requires them to mentally freeze their image as it was when they faced the mirror. When all this is done, the left-right reversal is obvious.

It can get a little complicated, but many people seem to have the mental circuitry to perform all this in a near subconscious flash of imagery. Verbalizing it is far more difficult and hardly anyone can hold on to the images long enough to do that.

The second common human strategy for dealing with complicated situations, is to freeze everything, avoid disturbing the scene, and look at the situation "as is" in order to perform an analysis of the subtle differences between two objects. This is the classic Sherlock Holmes approach to a crime scene.

In the mirror setup, performing this "as is" strategy means not rotating anything at all before doing the comparison between image and object. The left-right reversal then fails to show up; instead, a front-back reversal is apparent.

Of the two strategies, the second is far simpler. The first is almost too complicated to be done mentally, and it's often impossible to document in any way. Yet, it can happen in a flash of mental imagery, only to fade as soon as words are brought in to capture it.

Often a person, deep in the throws of the mirror riddle, will drift from one strategy to the other subconsciously. This is often described as "magical" by those who delight in that sort of thing, while others will literally complain of the headache it causes them.

When each strategy is carefully thought through, one at a time, clarity results.

It's unlikely, but it might possibly occur to a gymnast to apply the first strategy by rotating about an horizontal axis, instead of the vertical, in order to face the same direction. This means performing a hand stand to face in the same direction as the earlier frozen image; then up and down would be seen to be reversed. But who is prone to do this difficult action or even to imagine it? Not only is it difficult, but it risks injury and even seven years of bad luck if the mirror is broken!

So, it's not so much the mirror that does any reversing of perceived images, as it is people who do that by their selection of comparison strategies. The three strategies mentioned "reverse" all three dimensions: left-right, front-back, and up-down. Mirrors reverse the direction of light rays, but people decide how they are going to compare image to object. It's in this decision that the perceived reversal occurs. Mike O'Neill has been examining, collecting, and analyzing answers to the mirror reversal riddle for many years. It's been puzzling people for centuries. Even Nobel physicist Richard Feynman tried his hand at it.

Visit Mike's website for more of his thoughts on this subject.