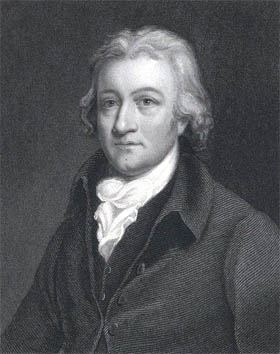 Edmund Cartwright was an English inventor of a mechanical loom (patented1785) that was the ancestor of the modern power loom. Cartwright also invented a wool-combing machine (1789) and an alcohol engine (1797).

Born at Marnham, Nottinghamshire, he was educated at Oxford before obtaining the rectory of Goadby-Marwood, Leicestershire (1779), where on his glebe-land he made improvements in agriculture. A visit to the cotton-spinning mills of Richard Arkwright in Derbyshire directed his attention to new methods of weaving. The result in 1785 was the mechanical loom, an ingenious though quite crude machine; upon which, however, he subsequently made improvements. At Doncaster he set up a factory, in which his loom was used, but he met with such determined opposition, and the expense was so great, that he had to give up business. A mill set up at Manchester with 400 of the power looms burned down. It was not till the beginning of the nineteenth century that the power loom came into practical use.

In 1790 Cartwright took out a patent for combing wool, and secured patents for various other improvements in connection with manufacture. He even joined Robert Fulton in his experiments for applying steam to navigation. All these efforts brought him no direct gain, but 1809, in consideration of the benefits derived from his power loom, the government made him a grant of £10,000. Cartwright was the author of several poetical pieces. He died at Hastings.