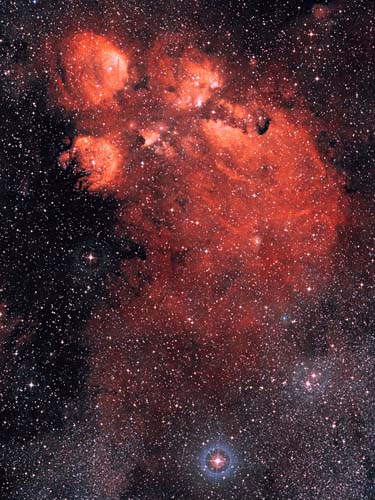 Cat's Paw Nebula. This composite view was created from images taken with the 2.2-m MPG/ESO telescope at the La Silla Observatory in Chile, using blue, green and red filters, as well as a filter designed to let through the light of glowing hydrogen.

The Cat's Paw Nebula (NGC 6334), also known as the Bear Claw Nebula, is a large emission nebula that lies in the constellation Scorpius (near the tip of the scorpion's tail). The whole cloud is about 50 light-years across. It was discovered by astronomer John Herschel in 1837, who observed it from the Cape of Good Hope.

NGC 6334 is one of the most active nurseries of massive stars in our galaxy and has been extensively studied by astronomers. The nebula conceals a number young luminous blue stars – each nearly ten times the mass of our Sun and born in the last few million years. The region is also home to many infant stars that are buried deep in the dust, making them difficult to study. In total, the Cat's Paw Nebula could contain several tens of thousands of stars.

The nebula is red because its blue and green light are scattered and absorbed more efficiently by material between the nebula and Earth. The red light comes predominantly from hydrogen gas glowing under the intense glare of hot young stars.