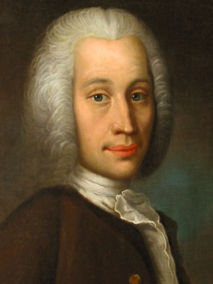 Celsius was born in Uppsala where he succeeded his father as professor of astronomy in 1730 and built Sweden's first observatory in 1741. He and his assistant, Olof Hiortner, discovered that aurora influenced compass needles. In 1733 he published a collection of 316 observations of the aurora borealis made by himself and other astronomers.

Celsius was a strong supporter of the Gregorian calendar.

The Celsius, also known as centigrade, is a unit of temperature difference equal to 1 kelvin (K), originally defined by dividing the interval between the boiling point and freezing point of water into 100 equal divisions. The name 'Celsius' officially replaced 'centigrade' in 1948. The Celsius scale has largely superceded the Fahrenheit scale.