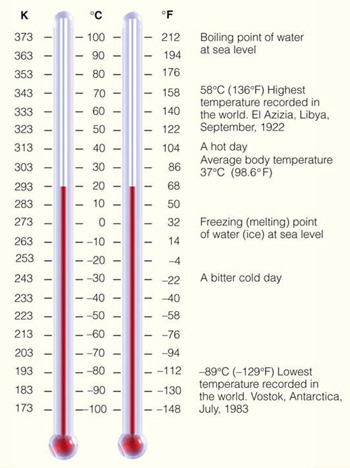 Gabriel Fahrenheit was a Polish-born German instrument-maker who spent most of his life in Holland. He invented the alcohol thermometer (1709) and the first mercury-in-glass thermometer (1714), and discovered the variation of boiling point with atmospheric pressure. However, he is best remembered for the Fahrenheit temperature scale, which he devised (see below).

The Fahrenheit scale is a temperature scale based on the freezing point of water (32°F) and the boiling point of water (212°F). The interval between these points is divided into 180 equal parts. Although still commonly used in the United States, elsewhere the Fahrenheit scale has been superceded by the Celsius scale first proposed by Anders Celsius. Degrees Fahrenheit are converted to degrees Celsius by subtracting 32 and then dividing by 1.8. See also third law of thermodynamics.