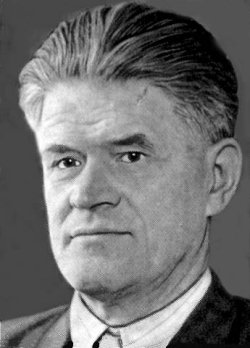 Pavel Cerenkov was a Russian physicist who in 1934, while working at the Institute of Physics of the Soviet Academy of Sciences, discovered that light is emitted by charged particles traveling through media at speeds higher than the speed of light in those media. This type of light is now known as Cerenkov radiation. Cerenkov was awarded the 1958 Nobel Prize in Physics with his co-workers, Ilya M. Frank and Igor Y. Tamm, who provided an explanation for Cerenkov radiation in 1937).

Cerenkov radiation, also called Cerenkov light, is visible light, with a maximum intensity in the blue spectral region, which is produced by charged particles traveling through a translucent medium at a speed greater than the speed of light in the same medium; it is often seen (as in the illustration here) when radioactive materials are stored under water. Cerenkov radiation The threshold energy for the occurrence of Cerenkov radiation for electron radiation in water (n = 1.33) is 260keV.

The phenomenon was discovered by Mallet in 1926 and studied by Cerenkov from 1934 to 1938. Cerenkov proved that it was not a fluorescence effect and found that the light was partially polarized. A correct theoretical explanation for Cerenkov radiation was first given by Frank and Tamm in 1937.

Cerenkov radiation is used in a Cerenkov counter – a device that identifies particles passing through it by observing a flash of light generated in a manner similar to a sonic boom.