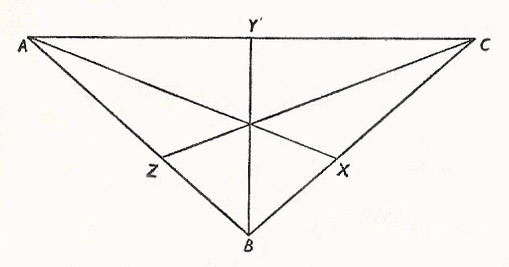 Giovanni Ceva was a Jesuit-trained Italian mathematician who specialized in geometry. He studied first in Milan and then at the University of Pisa, where eventually he became a professor. In 1686, he was designated as professor of mathematics  at the University of Mantua and worked there for the rest of his life. His greatest discovery is the theorem named after him.

Ceva's theorem states that three concurrent lines passing through the three vertices of a triangle intersect the sides of the triangles in such a way that the product of three non-adjacent intercepts on the sides is equal to the product of the other three intercepts. Referring to the diagram: AY.BZ.CX = AZ.BX.CY.

The term Cevian line was coined by French geometers around the end of the eighteenth century to honor Ceva. It is defined as any line joining a vertex of a triangle to a point on the opposite side. The median, altitude, and angle bisector are all examples of Cevians. The perpendicular bisector, however, in most cases, is not a Cevian because it doesn't usually pass through a vertex.