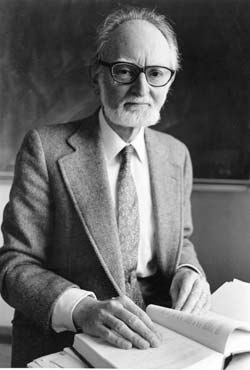 Owen Chamberlain was an American physicist who shared the 1959 Nobel Prize in Physics with Lawrence Berkeley Laboratory and University of California at Berkeley colleague Emilio Segrè in recognition of their discovery of the antiproton in 1955 (see antiparticle). Between 1942 and 1946, Chamberlain worked on the development of the atomic bomb after which he became professor of physics at the University of California, Berkeley.

The discovery of the antiproton, the mirror image counterpart to the proton in ordinary matter, was made possible through the combination of the Bevatron accelerator, the world's most powerful at that time, and a unique detector, designed by Chamberlain and his colleague, Clyde Wiegand, that was set off only by particles moving at the speed predicted for antiprotons.