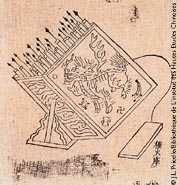 Fig 1. A battery of fire-arrows. 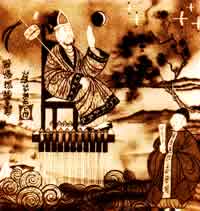 Although stories of early rocket-like devices appear sporadically in the historical records of various cultures, the Chinese are generally reckoned to have been the first to use rockets in both ceremony and war. By the first century AD, a simple form of gunpowder appears to have existed in China, used mostly for fireworks in religious and other festive celebrations. Bamboo tubes were filled with the mixture and tossed into fires to create explosions. Doubtless some of these tubes failed to explode and instead skittered out of the fires, propelled by the gases and sparks produced by the burning gunpowder. In any event, the Chinese began to experiment with the gunpowder-filled tubes and hit upon the idea of attaching them to arrows and launching them with bows. Eventually, it was found that the gunpowder tubes could launch themselves just by the power produced from the escaping gas, and the true rocket was born.

The earliest we know true rockets were used is 1232, a time when the Chinese and Mongols were at war. During the battle of Kai-Keng, the Chinese repelled their enemy with a barrage of "arrows of flying fire" – the first solid-propellant rockets. A tube, capped at one end, was filled with gunpowder; the other end was left open and the tube attached to a long stick. When the powder was ignited, the rapid burning of the powder produced hot gas that escaped out the open end and produced thrust. The stick acted as a simple guidance system that kept the rocket moving in the same general direction throughout its flight. Just how effective fire-arrows were as military weapons is not clear, but their psychological effect must have been formidable because following the battle of Kai-Keng, the Mongols began making their own rockets and may have been responsible for the spread of this technology to Europe.

Nearly all rockets up to this time were used for warfare or fireworks, but there is an amusing Chinese legend that reports the use of rockets as a means of transportation. With the help of many assistants, a lesser-known Chinese official named Wan-Hu rigged up a rocket-powered chair. Attached to the chair were two large kites, and fixed to the kites were 47 fire-rockets. On launch day, Wan-Hu sat himself on the chair and gave the order to light the rockets. Forty-seven aides, each carrying a torch, rushed forward to light the fuses. Moments later, there was a tremendous roar accompanied by billowing clouds of smoke. When the smoke cleared, Wan-Hu and his flying chair were gone. No one knows for sure what happened to Wan-Hu, but it seems likely that if the event really did take place, he and his chair were blown to bits: fire-arrows were as apt to explode as to fly.