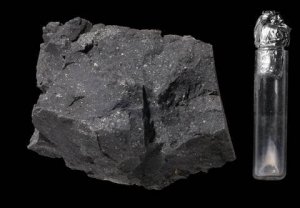 The Cold Bokkeveld meteorite is a carbonaceous chondrite that fell in many pieces (the largest recovered weighing 3 kg) near the Cold Bokkeveld Mountains, in Cape Province, South Africa, on October 13, 1838. From a sample of it, Friedrich Wöhler extracted an oil "with a strong bituminous odor." Having also extracted organic material from the Kaba meteorite, he concluded that these substances had a biological origin. Only later was it realized that carbon compounds could be created in space by inorganic processes. In 1951–52, G. Mueller at University College, London, found chemicals resembling hydrocarbons in the Cold Bokkeveld stone, a discovery referred to by Melvin Calvin and Susan K. Vaughan in their work on the biological significance of organic matter in meteorites.

The Cold Bokkeveld meteorite is estimated to be about 4.5 billion years old, which is roughly as old the Solar System. However, it contains something older still: microscopic diamonds. When heated, these diamonds release the inert gas xenon. The mixture of xenon isotopes found in the diamonds has not been found anywhere on Earth.