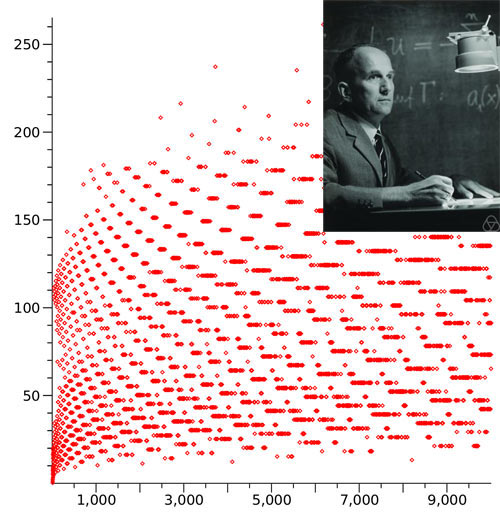 Numbers from 1 to 9999 and their corresponding total stopping time.

Needless to say, mathematicians have tried to find an exception, but so far they've drawn a blank. It's a simple matter to program a computer to keep checking successively bigger numbers until it runs out of time or its owner out of patience. Mathematicians have applied this brute-force approach and shown (at the time of writing) that there are no violations of the hypothesis out to a value of 87 × 260. But this signifies nothing. The next biggest number that hasn't been checked might be the one that breaks the mould: that leads to a sequence that blows up to infinity or gets stuck in an endlessly repeating loop.

The beauty and mystery of what Collatz suggested is that anyone, even a child as young as eight or nine, can grasp what it's about. It's no exaggeration to say that it's the easiest-to-understand open problem in all of maths, having the appearance almost of a party trick. But the fact that it's remained open since it's discovery in Victorian times is a measure of its true depth. It relates not just to number theory but to issues of decidability, chaos, and the very foundations of mathematics and computation. Paul Erdös said of it: "Mathematics is not yet ready for such problems".

British mathematician Bryan Thwaites (1996) has offered a £1,000 reward for a resolution of the problem. However, John Conway has shown that Collatz-type problems can be formally undecidable, so it not known if a solution is even possible.