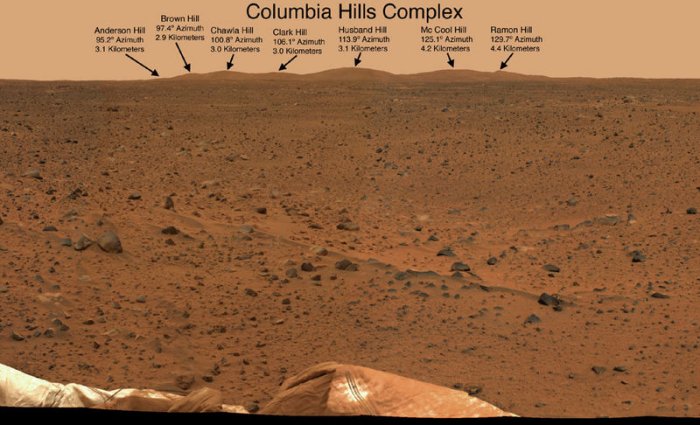 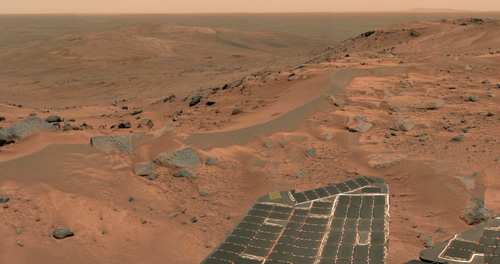 View from the top of Husband hill taken by Spirit on Aug 23, 2005. The summit appears to be a windswept plateau of scattered rocks, small sand dunes, and exposed outcrops. Credit: NASA/JPL.

The Columbia Hills is a range of low hills inside Gusev crater on Mars, first observed by the Mars Exploration Rover Spirit when it landed within the crater in 2004. The range was named by NASA in honor of the Space Shuttle Columbia, which was lost during reentry in February 2003. The individual peaks of the Hills were named after the seven astronauts who died in the disaster. Though not yet official, these names are expected to be approved by the International Astronomical Union. They are Anderson Hill (after Michael P. Anderson), Brown Hill (after David M. Brown), Chawla Hill (after Kalpana Chawla), Clark Hill (after Laurel Clark), Husband Hill (after Rick D. Husband, mission commander), McCool Hill (after William C. McCool), and Ramon Hill (after Ilan Ramon).

The Columbia Hills lie approximately 3 km (2.1 mi) from Spirit's original landing position. Spirit reached the summit of one of Husband Hill – 82 m (269 ft) above the surrounding plain of Gusev crater and 106 m (348 ft) higher than its landing site – on sol (martian day) 581 of its mission, after a year of ascent. Seen from Spirit's landing position, Husband Hill had seemed the tallest of the seven peaks. However, later measurements made by Spirit, and confirmed by digital maps created from orbital images, showed that McCool Hill is about 26 m (85 ft) taller than its neighbor.