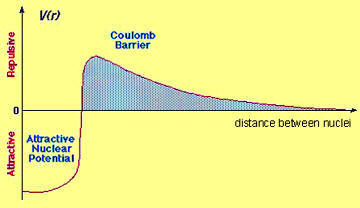 The Coulomb barrier is an energy barrier resulting from electrostatic interaction that two nuclei must overcome in order that they can approach closely enough to undergo nuclear fusion. The Coulomb barrier is produced by electrostatic potential energy. In the fusion of light elements to form heavier ones the positively charged nuclei must be forced close enough together to cause them to fuse into a single heavier nucleus. The force between nuclei is repulsive until a very small distance separates them, and then it rapidly becomes very attractive. Therefore, in order to surmount the Coulomb barrier and bring the nuclei close together where the strong attractive forces operate, the kinetic energy of the particles must be as high as the top of the Coulomb barrier. This requires extremely high temperatures, if temperature alone is considered in the process. In the case of the proton-proton chain in stars, this barrier is penetrated by quantum tunneling, allowing the process to proceed at lower temperatures.