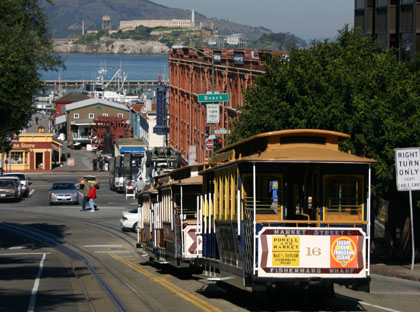 A cable car is a passenger vehicle drawn by a moving cable driven by an exterior power source. The most famous cable cars, those of San Francisco, are driven by a continuous cable running beneath the street surface: from each car a grip descends through a slot in the roadway; it can be attached to or detached from the cable by the driver's controls.

In aerial tramways the cable is supported by means of pulley wheels, which run along one cable; a separate cable provides the motive power. Ski lifts are similar, though the car is usually supported by the moving cable alone. The cable-car principle is used by rail transportation on steep gradients in the form of a funicular; here an ascending car is usually counterbalanced by a descending car attached to the same cable.