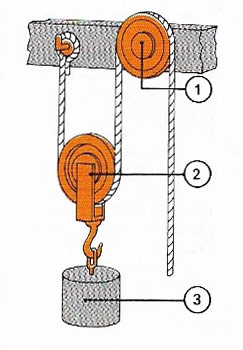 A simple arrangement of two pulleys has one fixed pulley (1); the other (2), to which a weight (3) is attached, is free to move. If someone hauls on the free end of the rope the movable pulley and weight are pulled upwards by twice the hauling force (less the frictional resistance) because they are held by two lengths of the rope. But the weight is raised through only half the distance hauled on the rope.

This factory hoist is hooked to a support (1) and has two fixed pulleys of different sizes (2) together with a movable pulley (4) to which a load (5) is attached. An endless chain (3) passes around the whole system of pulleys. A pull on one side of the chain loop extending over the larger fixed pulley exerts a much greater force to lift the load. A pull on the other side lowers the load.

A pulley is a type of simple machine consisting of a wheel with a groove in it around which a rope passes. Pulleys can make it possible for a person to lift several times their own weight. Bending down to lift an object from the floor is awkward and difficult if the object is heavy. It is much easier to lift the object by heaving down on the rope of a pulley.

The simplest type of pulley block consists of a wheel, fixed from its center to the ceiling in such a way that it is free to turn. Because it is fixed to the ceiling it is called a fixed pulley. A rope or chain runs over the wheel. The load to be lifted is attached to one end of the rope and the person hauls on the other end. The only advantage here is that of posture. The person can remain standing. But to raise a mass of 20 kilograms (equal to a load of 200 newtons) the effort exerted must be at least 200 newtons (N). This machine has a mechanical advantage (force ratio), = load/effort, of 1. The load (resistance) is the same as the effort.

A single movable pulley can give a mechanical advantage of 2. This time, one of the ropes is fixed and the pulley itself is cradled in the rope. The load is hung from the pulley block and the effort is used to pull upwards on the free end of the rope. Because the load is now hung from two ropes, each taking half of the strain, the effort needed is only half the size of the load. At first sight, this looks like a way of getting something for nothing, but in fact it is not so. The work done by the effort is never less than the work done on the load. For every meter the rope is raised, the load rises only 0.5 m. This is because both ropes have to be shortened.

If pulleys had no weight and there were no frictional forces opposing the raising of the load, then the mechanical advantage and the velocity ratio would be equal. But in fact there are frictional forces acting and the pulley does weigh something and so extra effort is needed to overcome these factors. This in practice lessens the mechanical advantage, making it smaller than the velocity ratio.

Here, as a simplification, the pulleys are thought of as being weightless and frictionless.

Usually a pulley system consists of a combination of both fixed and movable pulley blocks, with the "effort rope" arranged so that the person can haul down upon it.

Variable speed can be obtained from a single-speed drive shaft by the use of stepped or cone-shaped pulleys with diameters that give the correct speed ratios and belt tensions.

Belt-driven pulleys are common driving arrangements for factory and agricultural machines. A circular (endless) belt transmits motion between one pulley on the shaft of a motor and another on a machine shaft, for example that of a lathe. By giving the pulley on the motor or driving shaft a different diameter from the pulley on the machine or driven shaft, the speed of rotation of the driven shaft can be varied. Several pulleys of different sizes are often fitted together on the driving shaft to provide a range of speeds for the driven shaft. This is known as a stepped pulley system. The rim of a pulley may be broad and flat to take a wide belt. Alternatively, the rim face may be grooved to accommodate narrower belts that areV-shaped or circular in cross-section, which prevents them slipping from the pulley.