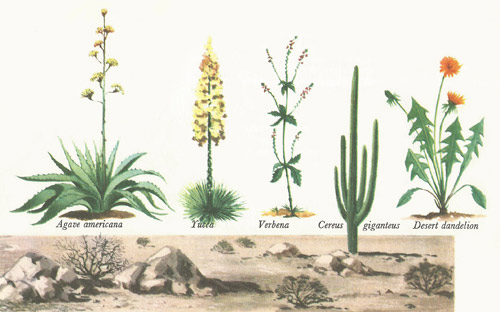 Miscellaneous common plants of the desert. 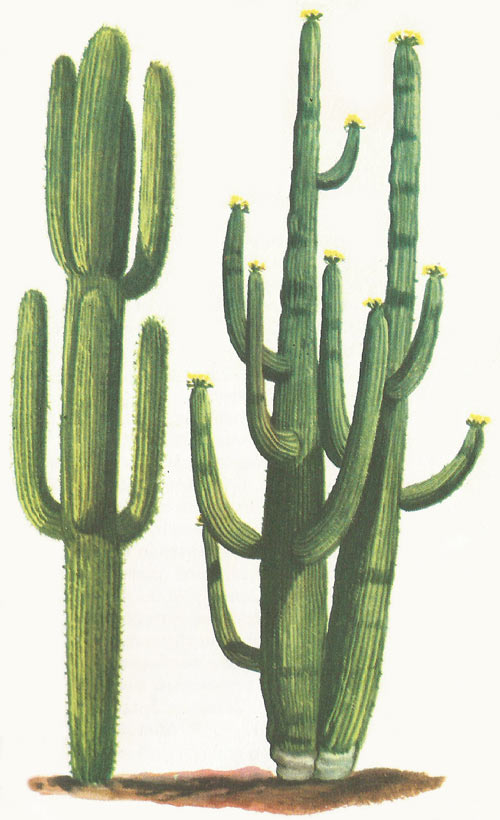 Typical rocky deserts are found in the western part of the United States, and their characteristic plants are the cacti. They belong to the type of plants known as succulents; their leaves are converted to spines and their stems are green and carry out the function of photosynthesis (usually performed by the leaves), and they also act as reservoirs to store water, which is absorbed on the rare occasions when it rains. As in the case of desert bushes like the acacias, the spines serve to protect them against browsing animals.

An almost globular species of cactus that grows nearly 3 feet across, and has interlacing yellow spines 3 inches long. The small red flowers are borne on the top of the plant. It is common in the American deserts.

On the rare occasions when there is rain in the desert this cactus bears beautiful, rose-colored flowers. It is allied to the prickly pear.

The stems of this cactus are flattened and look like large, fleshy leaves with tufts of sharp spines growing on them. The flowers are yellow and the fruit is edible. A native of America, this plant is now widely distributed.


Cereus giganteus (or Carnegiea gigantean as it is sometimes called)

This is the largest of the cacti and grows up to 70 feet in height. It is a native of the hot deserts of the south-western United States, and is a characteristic feature of the scenery of this region. The fruits are green and contain a red pulp which is edible; the flowers are yellow.

Other plants often found in the American deserts include the agaves and the yuccas. Although not closely related, they have the same habit of growth – a rosette of tough, spiky leaves growing from a stem at ground level, and a tall central stalk bearing the flowers. Agave Americana is called the century plant because it flowers at very long intervals. When it rains, numerous short-lived plants spring up in the desert, among them the sand-verbena and the desert dandelion.