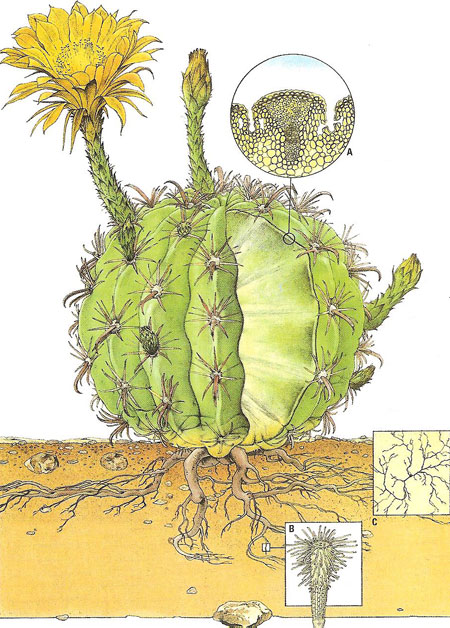 Fig 1. Cactus with its system of roots. 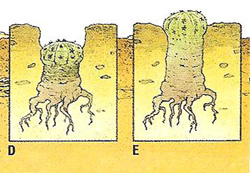 A succulent is a plant that stores water in its tissues and is thus adapted to living in arid regions or during periods of drought. Usually perennial and evergreen, most of the succulent plant body is made up of water-storage cells, which give it a fleshy appearance. A well-developed cuticle and low-rate of daytime transpiration also conserve water. Swollen leaves and stems have a smaller surface area to volume than thin ones, thus further reducing water loss.

Cacti are the most familiar succulents but representatives occur in other families, notably the Crassulaceae (stonecrops and houseleeks) and Aizoaceae (living stones, memsembryanthemum). Many succulents have attractive foliage and colorful, though often short-lived, flowers. In flowers, the slender column of tissue that arises from the top of the ovary and through which the pollen tube grows.

Cacti (Fig 1) have their stomata sunk down into pits (A) which helps cut down transpiration – the evaporation of vital water – because the air in the pit is protected from air movements above the surface of the leaf and becomes humid. Cacti have tough outer skins, which are often waxy to cut down water loss. Inside, they are fleshy and capable of storing a lot of moisture.

Cacti flower rarely and briefly, after the often violent desert rains that can turn wastelands into temporary gardens.

The spherical shape of many cacti maximizes their volume while minimizing their surface area, so that they are ideal water barrels. The ridged body structure of a cactus also plays a role. It may help reduce tissue damage during the inevitable shrinkage that accompanies water loss.

Cacti spines are actually much reduced leaves. Along with the plant's hairs they hinder airflow and help reflect heat. They also increase the heat-losing surface area of the plant without increasing its water-losing area. In addition, they discourage grazing animals from eating its succulent flesh.

Cactus roots can penetrate to a depth of 6 meters (20 feet) in their search for water. Alternatively, the root system may become swollen, water-retaining tubers. Most cacti (Fig 1), however, have a wide-ranging system of fine roots, which are equipped with microscopic hairs (B). These may only penetrate a short way underground, but often cover a huge area (C) so that the cactus can quickly replenish its water supplies when water is available. In dry conditions, there are many plants that are better at absorbing water than cacti, such as small bushes with long roots.

Many cacti (Fig 2), such as Echinocereus pulchellus (D), hide themselves underground in the dry season. Only when conditions are favorable do they extend their green tops above the surface (E). In this way, they combine drought resistance with effective drought evasion.