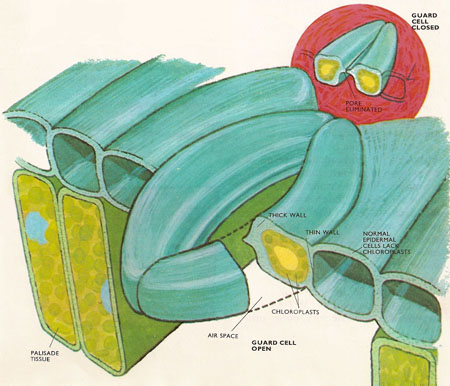 Turgor pressure in opposing guard cells forces them away from one another. The stomatal pore, in between, becomes elongated. Collapse of the cell causes the adjacent walls to come together again so eliminating the pore.

In plants, a stoma is a tiny opening bordered by guard cells in the epidermis of leaves and stems. Water passes out of a plant mainly through the numerous stomata (plural of stoma, which is Greek for "mouth"), and carbon dioxide passes in chiefly by the same pathway.

Green plants make their own food, building up simple chemical compounds such as carbon dioxide and water into starch. Since carbon dioxide is usually taken from the air, gas exchange is needed between the atmosphere and the plant's internal airspace system.

If the outer impervious layer of the plant – the epidermis – was continuous over the whole plant surface, such a gas transfer would be impossible. But scattered among the thick-walled, tightly packed epidermal cells are small elliptical openings surrounded by two bean-shaped cells – the guard cells. A pair of guard cells and the opening between them make up a stoma; it is through the stomata that carbon dioxide diffuses into the plant.

In letting in carbon dioxide, the plant also loses water vapor – a substance vital to its existence. When water is plentiful the loss is not important because uptake replaces the water which has evaporated. But in drought, water loss needs to be drastically reduced even if carbon dioxide supply has to be cut down at the same time. The stoma is an automatic device built into the leaf with just this function.


How the stoma works

The mechanism by which the stoma works is quite simple. The guard cells on either side of the opening are modified epidermal cells. Their distinctive crescent or bean-shape has already been mentioned. At each end they are firmly joined together but are separated centrally leaving the slit, or stomatal pore. Differing from ordinary epidermal cells, the guard cells have unevenly thickened cell walls – thin on the side away from the pore, becoming much thicker along the surface in contact with the pore. chloroplasts, structures rich in chlorophyll – the organic catalyst needed for photosynthesis – are also present, enabling guard cells to build up food.

When water is plentiful, the guard cells are turgid – swollen up with the water. The thinly lined cell wall, on the side away from the opening, stretches. The thickly lined cell wall against the open does not. The result is that the stretching of of the thin wall pulls the two thickened walls apart, away from the opening. The size of the pore consequently increases and the maximum amount of diffusion can take place. In dry conditions, water is lost from the guard cells. Turgidity is lost and, in becoming limp, the inside edges of the two guard cells come together, closing the opening.

The quantity of water is not the only factor which influences the mechanism. Light is also important. Insoluble starch is synthesized into soluble sugars. This increase in concentration means that more water flows in from neighboring cells by osmosis. With darkness the reactions are reversed and the opening is closed by the collapsing guard cells. As a rule, stomata open in the daytime and close at night.

Stomata on stems are sparse, because stems are not usually important for photosynthesis. More commonly they are concentrated on the leaves – usually on the under surface where they are not so exposed to drying agencies. Vertically growing leaves, for instances, of grasses, commonly have equal numbers on each surface, while plants with leaves that float, such as lilies, have their stomata completely confined to the upper surface.

The actual number of stomata varies with plants, 65 per square centimeter on the upper surface of a daffodil to 450 on the lower surface of an oak leaf. Pores, when completely open, rarely occupy more than 3% of the total leaf surface. But what is important, is that a number of minute pores let in more carbon dioxide than a single large one. The numerous minute stomata allow almost as much carbon dioxide to diffuse into the plant as through a whole leaf surface. The possession of stomata, however, does enable an effective water-saving mechanism to function – especially important in very dry weather.