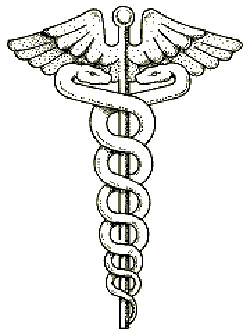 In mathematics, a caduceus is a pair of curves in space, each of which is a helix and which twist in opposite directions around one another. In mythology, the caduceus is the wing-topped staff, wound about by two snakes, carried by Hermes, the Greek messenger of the gods. The snakes became entwined after Hermes threw his staff at them to the stop them fighting.

A caduceus was carried by Greek officials and became a symbol for truce and neutrality. Since the sixteenth century it has also served as a symbol of medicine. Before modern medicine, people infected by parasitic worms were treated by physicians using a stick and knife. A slit would be cut in the patient's skin in front of the worm, and as the parasite crawled out of the incision, the worm would be wound around a stick until it was totally removed. The medical treatment of parasitic worm infection by knife and stick is believed to be the inspiration for the original caduceus. It was used as a promotional sign for physicians of that period.