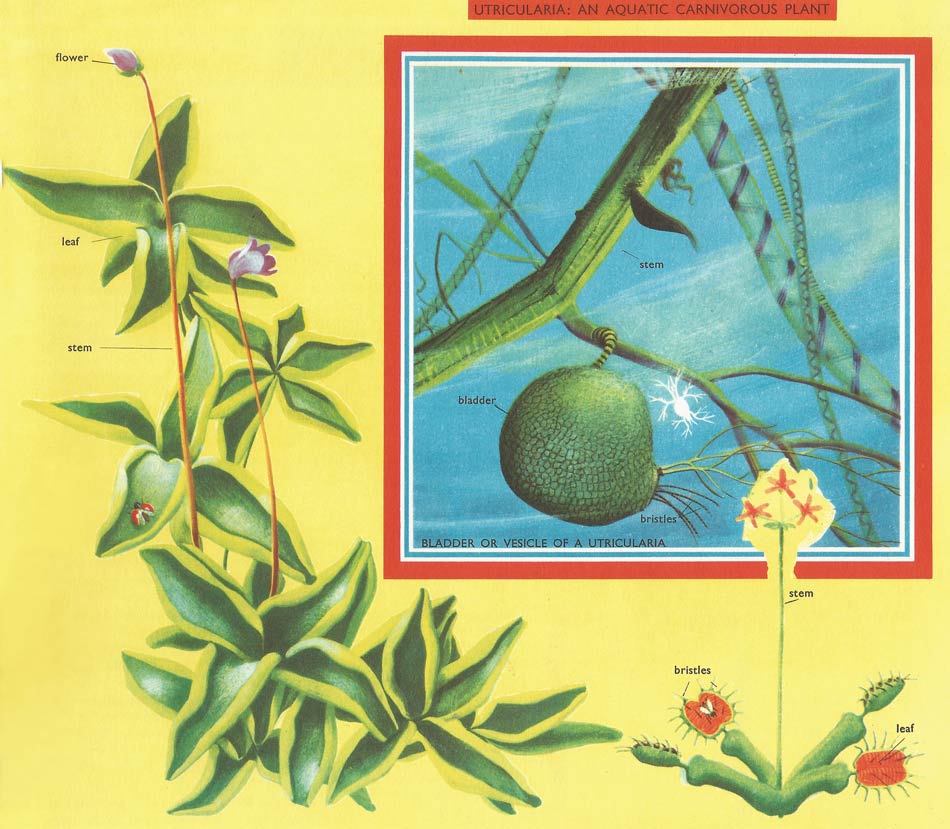 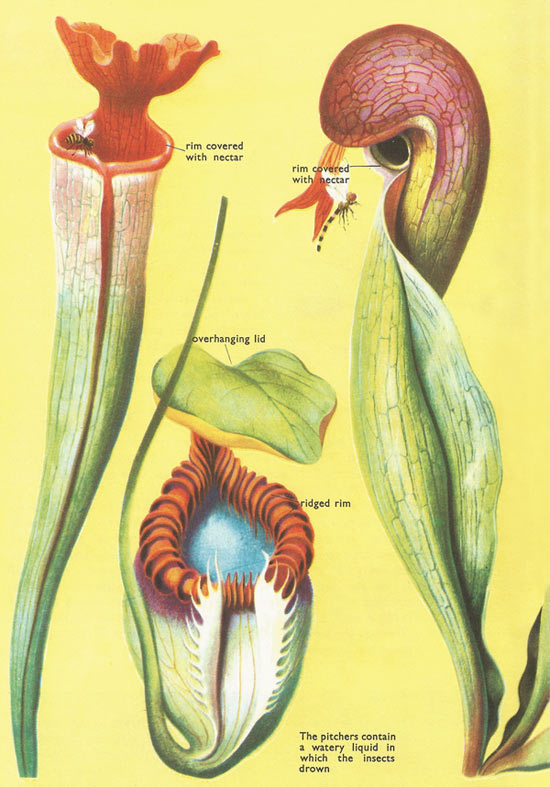 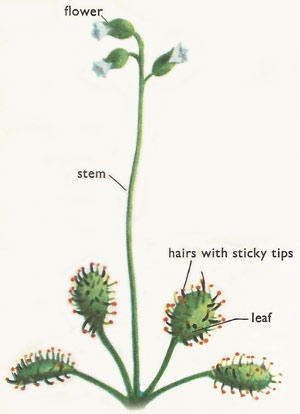 How the leaf of a sundew plant captures and digests an insect. 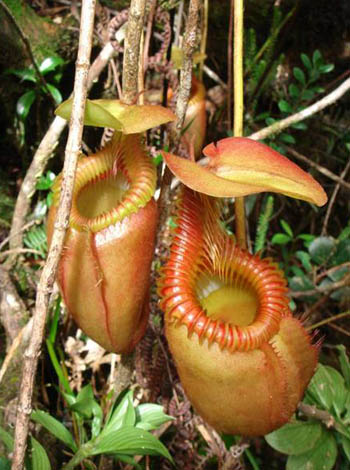 A carnivorous plant, also called an insectivorous plant, is a specialized plant whose leaves are adapted to trap and digest insects, which supplement their food supply. Carnivorous plants have poorly developed root systems and are normally found living in nitrogen-deficient sandy or boggy soils, or as epiphytes. The insects may be caught in vase-like traps (e.g., the pitcher plant, Sarracenia flava), by leaves that spring shut (e.g., the Venus fly trap, Dionaea muscipula), by a trapdoor (e.g., the bladderworts, Utricularia), or on sticky leaves (e.g., the sundews, Drosera). The captured insects are broken down by enzymes secreted by the plants and the products absorbed.

Altogether about 500 species of carnivorous plants are known, coming from various parts of the world. They all have the same mode of growth and nutrition as other green plants, but they add to the supply of nitrogenous compounds which they obtain from the soil by capturing and digesting insects and small animals. As might be expected, most of them are plants which grow in soil that has a poor supply of available nitrogen, such as peaty swamps, moors, and marshes. These plants can grow quite well without the extra food supply provided by insects, but it helps them to thrive, just as fertilizers help ordinary plants.

The swellings at the tips of the hairs of a sundew leaf are really glands which secrete the sticky liquid. This liquid has the double function of trapping and digesting the prey. Most carnivorous plants have glands of this kind, which secrete a digestive ferment. It contains enzymes, such as pepsin and trypsin, very similar to those produced in the stomach of animals.

Carnivorous plants are also adapted for absorbing the rich nitrogenous solutions that are produced through that part of the leaf which constitutes the 'trap'. In normal plants it is only the roots that absorb nutrients.

Carnivorous plants are found in several distinct groups or orders of the vegetable kingdom, though all of them belong to the highest division, that of the Angiosperms or flowering plants. The devices by means of which they entrap their prey can be classified under three kinds of insect trap:

1. The secretion of a sticky fluid to which the prey sticks when it touches it. This works very much like the 'fly-papers' which are sometimes hung up in houses to catch flies. This is the simplest type, such as the sundew (genus Drosera).

2. Leaves that are transformed into deep, pitcher-shaped vessels containing a watery liquid; the vessel is called an ascidium. Insects are prevented by various means from escaping, and finally they fall into the liquid and drown. This can be compared to the pit-fall type of trap set for large animals.

3. Organs, consisting of transformed leaves, which suddenly enclose or grasp the prey in response to its touching a certain sensitive spot. These can be compared to a spring trap.

In types 1 and 3 the plant always shows some degree of sensitivity and reacts by movement to the presence of the prey. This movement is not haphazard; a fly caught in the edge of a sundew leaf is pushed to the center so that it can be enveloped and digested more effectively. The traps of type 3 are the most advanced types of mechanism found in the plant world.

Type 2, the pitcher of pit-fall trap. is entirely passive; it requires no reaction of movement either to capture the prey or to digest it. On the other hand the traps of these plants often have a complicated structure designed to attract the insects; this gives them a very remarkable appearance.

This plant is a native of eastern North America, where it grows in bogs. The pitcher-leaves are tube-like and nearly a foot long, and insects are attracted by a sweet nectar which is secreted at the upper end of this tube. The insects are trapped and drowned, and then digested, in the same way as in the Nepenthes.

This is the best known of the plants with a pitcher or pit-fall type of trap. There are many species, found in the tropical regions of the Far East and in Madagascar. The plant has the form of a creeper or climber, and the leaves are elongated at their ends to form a stem-like structure; the pitchers are borne at the ends of these stems.

The pitchers are always held upright and contain a quantity of liquid; the largest species can hold as much as a quart. There is always a flap-like lid overhanging the pitcher, which is usually green in color, marked with orange or red. The edge of the pitcher is surrounded by a ridged rim, the inner edge is which overhangs the inside of the pitcher. Both rim and inside are smooth, affording no foothold to an insect which falls in, and victims very seldom escape once they are caught.

The liquid secreted by the plant contains digestive ferments and the prey is digested in five to eight hours.

This is another American plant and is known in California as the 'cobra plant' because people imagined it looked like this hooded snake. Its trap is of the pitcher type and the pitchers are very large - two to three feet long.

This little plant, known as butterwort, is common in Britain in the moorland country where the sundew is found. The leaves lie flat in the ground and are covered not with hairs but with minute glands which secrete a sticky liquid; the trap is therefore of the 'fly-paper' type. Only small insects are captured, and the plant's movement to catch prey is less marked than that of the sundew. There is increased secretion of liquid and the edge of the leaf rolls in.

Known as bladder-wort, this plant has a world-wide distribution and is common in ponds and streams, where it actually grows underwater. The plant bears numerous tiny bladders, each of which has an opening which is closed by a door or valve and surrounded by sensitive bristles.

When the trap is set the walls of the bladder are concave. If a swimming insect touches the bristles, the door immediately opens, the bladder expands and becomes round, and a quantity of water, together with the insect, is sucked into it. The prey is then digested in the usual way.

This is the famous 'Venus fly-trap', which occurs only in Carolina, USA. The leaves are expanded at their ends and divided along the mid-rib into two halves which can close together like a book. On the edges of each leaf there is a row of bristles or spines, and its surface is covered with glands of a brilliant red color. In the center there are six sensitive hairs, three on each side. When an insect alights on the leaf and touches the hairs the two sides of the leaf close together, the bristles interlock, and the insect is captured.