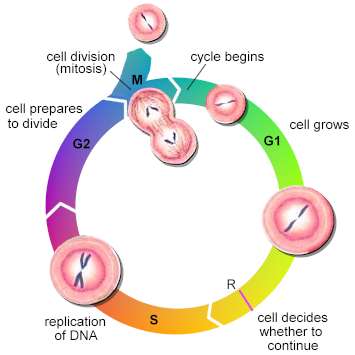 The cell cycle is the complete series of events from one cell division to the next. It is usually divided into the phase when DNA is replicated (S phase), the phase when the cell actually divides into two cells (M phase), the two intervening gap phases (G1 and G2), and a nondividing state called "quiescence" (G0).

Inside each cell is effectively a cell cycle clock that determines whether or not a cell should divide. This clock integrates the regulatory signals received by the cell with the current state of health of the cell. The cell cycle consists of four steps. In the gap 1 (G1) phase, the cell grows in size and checks the status of its internal systems. If everything is functioning normally, and any damage to the DNA has been corrected, the cell moves on through the cycle. If something is wrong and cannot be corrected, the cell halts its progression through the cycle and may initiate apoptosis and close down. In the accompanying diagram, R marks the point where restriction of the cycle can occur.

In the following synthetic (S) phase, the cell replicates its store of DNA in the chromosomes. Following this is a period of preparation for division called the G2 phase. Then the cell divides – the mitotic (M) phase. The two new daughter cells then enter the G1 phase of their own cell cycle.

Cytomorphosis is the name given to the changes undergone by a cell over the course of its lifetime.