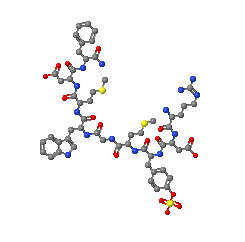 Cholecystokinin, previously known as pancreozymin, is a peptide hormone of the gastrointestinal system responsible for stimulating the digestion of fat and protein. Cholecystokinin (CCK) is secreted by the duodenum (the first part of the small intestine) and causes the release of digestive enzymes from the pancreas and bile from the gall bladder. It also acts as a hunger suppressant. Recent evidence has suggested that it plays a major role in inducing drug tolerance to opioids like morphine and heroin, and is partly responsible for the pain hypersensitivity often experienced during opioid withdrawal.