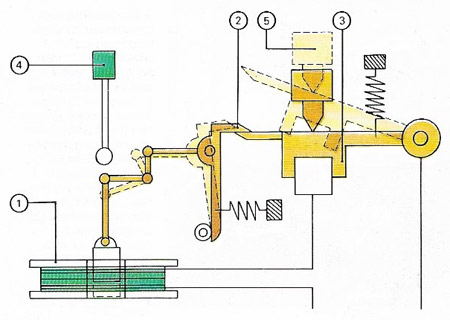 Circuit breakers may be used either in conjunction with, or in place of, a fuse to interrupt dangerously high currents. When too large a current flows through the coil (1), a magnetic field is produced which activates the catch (2), causing the spring-loaded contact (3) to rise. The current is interrupted, thereby protecting the circuit of which the breaker is part. No further current can flow until the circuit-breaker is closed again, which is achieved by pressing the reset button (5). To test the circuit-breaker, or to operate it manually, a push button (4) is pressed to move the contact.