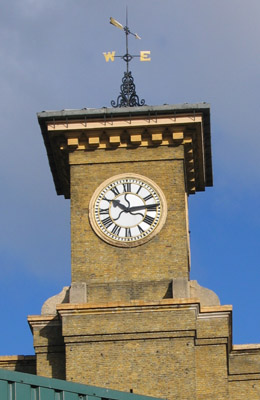 The earliest known clock problem was posed in 1694 by Jacques Ozanam in his Récréations mathématiques et physiques.

1. A clock has hour and minute hands of the same length and no numerals on its face. At what time between 6 and 7 o'clock will the time on the clock appear to be the same as the time read on the reflection of the clock in a mirror?

2. Which has a better chance of giving the right time: a clock that has stopped or one that loses a minute every day?

And here is another from Henry Dudeney's Amusements in Mathematics called "The Club Clock:"

3. One of the big clocks in the Cogitators' Club was found the other night to have stopped just when, as will be seen in the illustration, the second hand was exactly midway between the other two hands. One of the members proposed to some of his friends that they should tell him the exact time when (if the clock had not stopped) the second hand would next again have been midway between the minute hand and the hour hand. Can you find the correct time that it would happen?

2. The stopped clock, because it will give the right time twice a day whereas the other is only correct about every two years approximately.