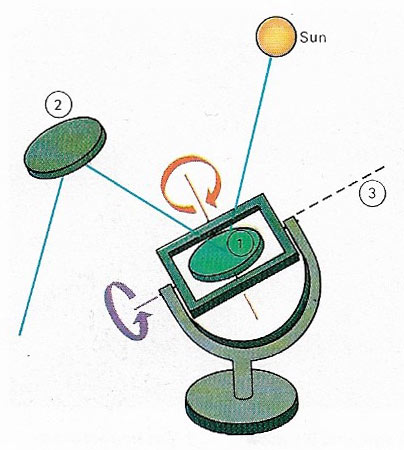 The coelostat, used to observe the Sun, overcomes the problem of maneuvering large telescope mounts with a movable mirror (1) that rotates with the Sun while another is stationary (2). One axis (3) of the rotating mirror points to the celestial pole and the other is adjustable.

A coelostat (pronounced "seelostat") is a device that uses two movable mirrors to reflect sunlight along a particular path – for instance, down a fixed telescope tube – so that the image at the other end of the telescope doesn't appear to move or rotate when the Sun moves across the sky. One of the mirrors rotates around an axis parallel to Earth's axis of rotation, at half the solar rate. The orientation of the other mirror is adjustable in all directions. The coelostat was invented by Gabriel Lippmann.

A coelostat is similar to a heliostat but has a more complex design and, unlike a heliostat, gives an image in a fixed orientation.