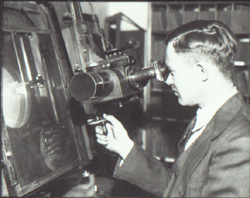 A comparator is a device used to look for parallax motion, proper motion, asteroids, or variable stars by quickly alternating between views of two photographic plates taken at different times; also known as a blink comparator or blink microscope. Changes in the configuration of the objects on the plates, such as the movement of a suspected planet, are detectable by their relative motion, or new objects become apparent by their alternate appearance and disappearance.

A similar instrument is the stereocomparator, which highlights objects that have changed position by their stereoscopic appearance.