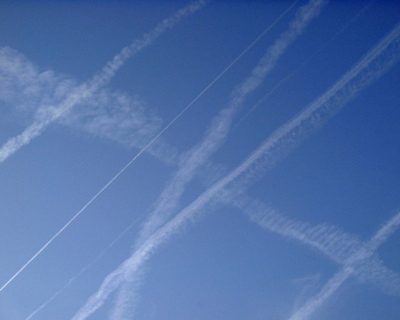 A contrail is a condensation trail that is left behind by a passing plane, typically a jet plane. Contrails form when hot humid air from jet exhaust mixes with environmental air of low vapor pressure (pressure due to water vapor alone) and low temperature. The mixing occurs directly behind the plane due to the turbulence generated by the engine. If condensation (conversion from a gas to a liquid) occurs, then a contrail becomes visible. Since air temperatures at these high atmospheric levels are very cold (generally colder than -40°C), only a small amount of liquid is necessary for condensation to occur. Water is a normal by-product of combustion in engines.

The length of time that a contrail lasts is directly proportional to the amount of humidity that is already in the atmosphere. A drier atmosphere leads to a more short-lived contrail, while an atmosphere that has more humidity will lead to longer-lived contrails. However, if the atmosphere is too dry, no contrails will form. Occasionally a jet plane, especially if ascending or descending, will pass through a much drier or more moist layer of atmosphere which may result in a broken pattern to the contrail, with it appearing in segments rather than in one continuous plume.

Now that jet plane traffic, both civilian and military, can be at anyplace over the globe at anytime, contrails are becoming more and more common. However, contrails have been recorded throughout the history of jet plane travel. Many reports exist from World War II of situations where the accumulations of contrails was so extensive that pilots were unable to keep visual contact with neighbor or enemy planes during combat. Contrails have been recorded from the Sahara Desert to the South Pole indicating that contrails are not constrained to only populated regions of the Earth.