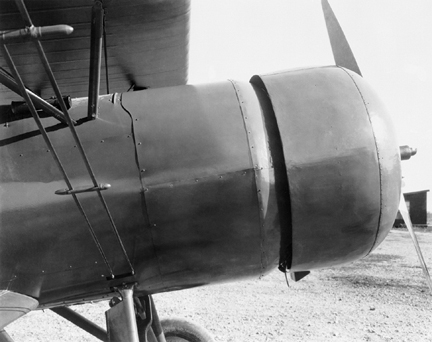 NACA cowling on a Curtis AT-5A at the Langley Memorial Aeronautical Laboratory, Oct 1928.

A cowling is a removable metal covering that houses the engine and sometimes also a portion of the fuselage of an aircraft that is powered by a radial engine. It enables the aircraft to fly more efficiently because it reduces the amount of drag it creates.

The NACA low-drag engine cowling was invented by Fred Weick, an engineer from the National Advisory Committee for Aeronautics, in 1928. The test aircraft for this cowling, a Curtis Hawk AT-5A biplane (see photo), featuring a Wright Whirlwind J-5 radial engine, reached an airspeed of 220 km/h fitted with the NACA cowling compared to 190 km/h without it.

The NACA cowling directs cool air to flow onto the center of the motor, where it is routed across the motor's hottest parts, i.e. the cylinders and cylinder heads. Moreover, turbulence after the air passes the free-standing cylinders is greatly reduced. The sum of all these effects reduces drag by as much as 60%.

The test conclusions resulted in almost every radial-engined aircraft being equipped with this cowling, starting in 1932. Cowlings are sometimes also used to enclose landing gear.