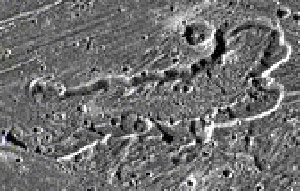 A cryptovolcano is a volcano-like feature on a planet or moon, that may or may not be an actual volcano. Examples have been found, for example, on the surface of Ganymede. Related terms are 'cryptovolcanic structure' and 'cryptoexplosion'. In the past, it was common to account for cryptovolcanic structures on Earth in terms large explosions within the crust. Sites attributed to cryptoexplosions are typically circular and involve anomalous rock deformation contrasting with the surrounding region, and often showing evidence that crustal material had been uplifted and/or blown outwards. Today most such structures are recognized as being highly eroded impact craters caused by the collision of large meteorites in the remote past.