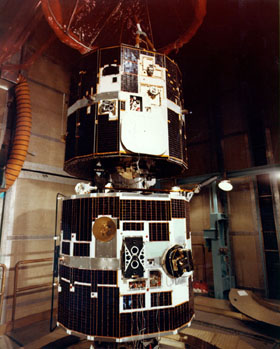 Pre-launch photo of the DE-1/DE-2 spacecraft stack before being covered by their fairings and mated with the Delta launch vehicle. DE-1 is on the bottom.

Dynamics Explorer was a NASA mission, launched on August 3, 1981, involving two spacecraft to study the interaction between the hot, thin, convecting plasma of Earth's magnetosphere and the cooler, denser plasmas and gases co-rotating in the ionosphere and upper atmosphere. DE 1 and DE 2 were launched together and placed in polar coplanar orbits to allow simultaneous measurements at high and low altitudes in the same field-line region.

The spacecraft approximated a short polygon 137 cm in diameter and 115 cm high. The antennas in the x-y plane measured 200 m tip-to-tip, and on the z-axis 9 meters tip-to-tip. Two 6-m booms were provided for remote measurements. Science operations continued over a nine-year period until terminated on October 22, 1990. The spacecraft were also known as Explorer 62 and 63.