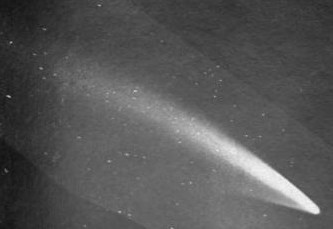 C/1910 A1, the Daylight or Great January Comet, photograph from Lowell Observatory.

The Daylight Comet of 1910 (C/1910 A1), also called the Great January Comet, was the brightest comet of the 20th century. It was independently found by so many people in the southern hemisphere that no single original discoverer could be named, though the first astronomer to see it appears to have been Robert Innes on 17 January 1910, at the Cape Observatory in South Africa. Most observers judged the comet to be brighter than Venus, giving it a magnitude of about -5. It upstaged the much anticipated return in 1910 of Halley's Comet.