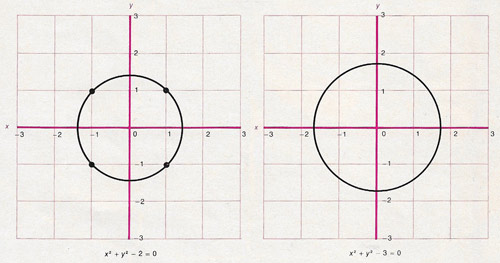 A Diophantine equation is an equation that has integer coefficients and for which integer solutions are required. Such equations are named after Diophantus. The best known examples are those from Pythagoras's theorem, a2 = b2 + c2, when a, b, and c are all required to be whole numbers – a so-called Pythagorean triplet. Despite their simple appearance Diophantine equations can be fantastically difficult to solve. A notorious example comes from Fermat's last theorem (recently solved), an = bn + cn for n > 2.

To give a specific example, suppose we want to find integer values for x and y such that

A trial and error approach using a computer would quickly find the solution: y = 4, x = 161. However, just a slight change to the equation to make it

One of the challenges (the tenth one) that David Hilbert threw down to 20th-century mathematicians in his famous list was to find a general method for solving equations of this type. In 1970, however, the Russian mathematician Yuri Matiyasevich showed that there is no general algorithm for determining whether a particular Diophantine equation is soluble: the problem is undecidable. 1, 2