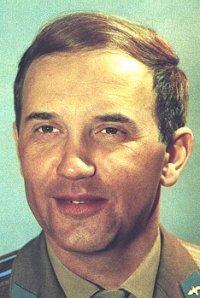 Georgy Dobrovolsky was a Soviet air force lieutenant colonel and cosmonaut, selected in 1963. In 1971, he commanded Soyuz 11 which docked with Salyut 1. The three-man crew remained in space for 24 days, performing meteorological and plant-growth experiments. During reentry of Soyuz 11, a valve in the spacecraft opened accidentally causing the cabin to depressurize. Dobrovolsky and his crew were found dead upon recovery of the craft.