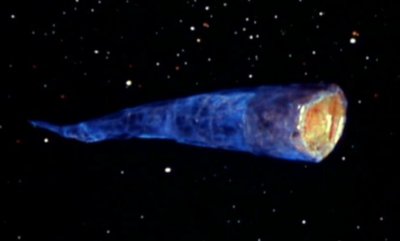 The Doomsday Machine from the Star Trek episode of that name.

A Doomsday Machine is a hypothetical weapon of immense power capable of destroying a civilization or an entire planet. The notion of a Doomsday Machine with the capacity to wipe out all human life in the event of a nuclear attack was described in the 1950s by the American military strategist Herman Kahn (1922–1983). It would consist of a computer linked to, and programmed to detonate, a massive stockpile of hydrogen bombs, thereby bathing the planet in lethal radioactive fallout at the signal of an impending nuclear attack from the Soviet Union or other foreign state. This manic scheme – the ultimate form of mutually assured destruction (MAD) – was parodied by Stanley Kubrick, who had met Kahn personally, in the 1964 film Dr. Strangelove.

The Doomsday Machine is also the title of an episode of the original series of Star Trek, in which an alien planet-killer threatens the starship Enterprise and her crew. Mr. Spock hypothesizes that the machine is a robot, the function of which is to break down planets for fuel. Captain Kirk believes that it is truly a "doomsday machine," built according to the theory of mutually assured destruction. Although Kirk succeeds in rendering the immense device inert, the episode ends with speculation that if this really is a doomsday machine, it may not be the only one roaming the Galaxy.

The term "berserker" is sometimes used in science fiction to refer to a large, space-going autonomous war machine that is programmed to destroy all intelligent life not resembling its long-lost creators. In some cases, the weapon is also a von Neumann machine – capable of building copies of itself with the same mission. The term was coined and used in this context by the SF writer Fred Saberhagen in his Berserker series of novels, the first of which was published in 1967. In Norse mythology, a berserker is a warrior prone to battle frenzy.