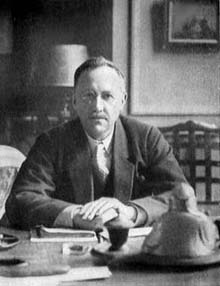 Lord Dunsany was an Irish writer who was one of the founders of the fantasy genre of literature. Edward John Moreton Drax Plunkett was born in London to a family whose roots in Ireland predate the Norman invasion. He inherited his father's title in 1899, fought in the Boer War, and returned to the ancestral home, Dunsany Castle, in 1901.

Lord Dunsany was a keen marksman and hunter, a fine player of cricket (Dunsany had its own cricket ground near the village), tennis (there is a court beside the Castle), and chess (he was an amateur champion and once drew with Grand Master Capablanca. He also wrote chess puzzles for the Times over many years and invented his own variant of the game. His first of many books, The Gods of Pegana, was published in 1905. In writings that spanned fantasy, drama, poetry, and science fiction, he was an early explorer of such ideas as chess-playing computers (in "The Three Sailors' Gambit" from The Last Book of Wonder and, again, in his 1951 novel The Last Revolution) and paradoxes in time travel (for example, in "Lost" from The Fourth Book of Jorkens and "The King That Was Not" from Time and the Gods.)