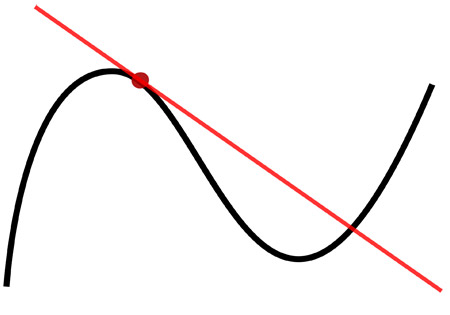 A function (black) and a tangent (red). The derivative at the point is the slope of the tangent.

The derivative of a function f(x), at the point x, is defined to be the value of the ratio

In the limit where the number h approaches zero, and is denoted df/dx or f '(x).

Derivatives provide a means of describing many processes which can be viewed as changing continuously in time. For instance, if the position of an object at a time, t, is given by p(t) then the velocity (which is defined as the instantaneous rate of change of position), obtained by differentiation, is given by the derivative dp/dt.

In an article in 1996, Hugo Rossi wrote: "In the fall of 1972 President Nixon announced that the rate of increase of inflation was decreasing. This was the first time a sitting president used the third derivative to advance his case for reelection."1