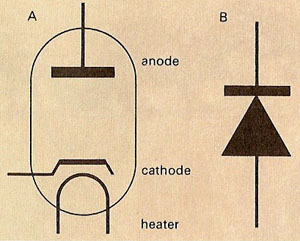 Diode graphic symbols for (a) electron-tube diode; (B) semiconductor diode.

A diode is an electronic device that allows current to flow in one direction only. Originally an electron tube (valve) having two electrodes (cathode and anode) used as a rectifier, but now extended to include semiconductor devices performing a similar function. The semiconductor diode usually has a single p-n junction. It allows electrons to flow freely in only one direction (n-type material to p-type).

A Zener diode blocks current flow until a critical voltage is reached, when it breaks down and conducts. See also tunnel diode.