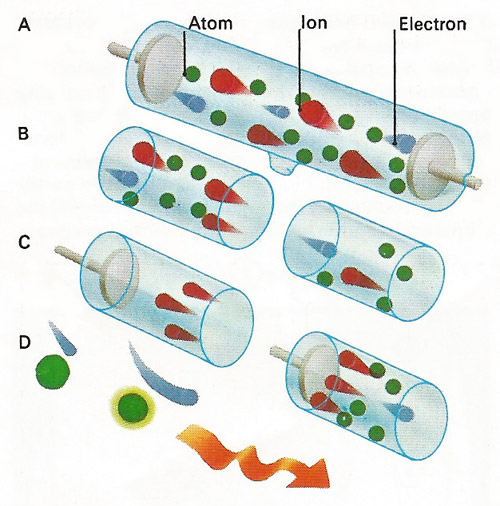 A discharge tube contains a gas at low pressure through which electricity is passed [A]. Electrons (negative particles) and ions (positive particles) move towards the electrodes [B]. Ions strike electrodes to produce more electrons [C]. Light is produced as electrons collide with gas atoms [D]. 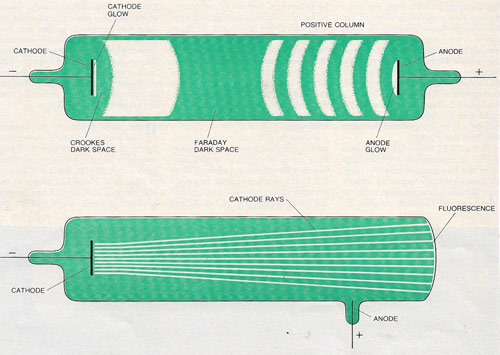 Effects of an electric discharge in an evacuated tube depend on the amount of gas remaining in the tube. At pressures of about a ten-thousandth of an atmosphere (top) electrons emitted by the cathode collide with and ionize residual gas molecules, producing a glow in various regions within the tube. With further rarefaction these collisions become infrequent, the bright areas recede toward the anode and the Crookes dark space expands to fill the length of the tube. At about a millionth of an atmosphere (bottom) no ionization glow is visible; it is under these conditions that cathode rays are produced. The electrons travel at high velocity, evoking fluorescence in the glass when they strike the end of the tube. The electrons are emitted perpendicularly to the surface of the cathode but diverge slightly as a result of mutual repulsion. Their path is not influenced by the shape or the position of the anode.

A discharge tube is a glass envelope containing gas at low pressure, which gives light due to the collision of electrons with gas molecules. Discharge lamps, filled with one or more of various gases, are used to give colored light: mercury vapor gives purple, sodium vapor gives yellow, and neon gives red. Early discharge tubes, called Geissler tubes, were used as toys. A fluorescent lamp is a discharge tube coated internally with a fluorescent substance.