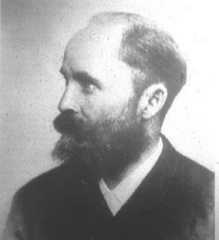 Carl du Prel was a popular nineteenth-century German philosophical writer whose influential Die Planetenbewohner und die Nebularhypothese ("The Inhabitants of the Planets and the Nebular Hypothesis", 1880) drew a close (and fallacious) analogy between cosmic and biologic evolution. du Prel argued that the same process of Darwinian natural selection that had acted on terrestrial organisms had also operated on the planets of the solar system, so that those most advantageously placed during their formation period actually survived. From this du Prel concluded that "all planets that have cooled down are habitable and therefore inhabited." Life, he conjectured, had reached a more advanced stage on some worlds so that what man had achieved through technology, nature had accomplished elsewhere organically – for example, through the evolution of extra senses.